The David Lloyd open was held last Saturday at David Lloyd Club Belfast and was a great success. Ormeau had 26 players taking part which is quite a few more than last year and the Club would like to congratulate everyone who entered and battled hard all day. Here is a report focussing on our players in the main events:

We had 4 players in the ¼ finals and Keith Knox probably had the most difficult task against old rival and current Irish # 1 Gavin Maguire. Keith battled hard and played with great enthusiasm and fight but finally succumbed 3/1 to Gavin in a pulsating match. There was a big crowd watching and included a few of the David Lloyd tennis team who commented on what a warrior Keith was and that they were amazed at the level of play! Zak Earley defeated Phil Wallace by the same scoreline and Thomas Earley lost to one of the most improved players Dillon Byrne (UCD) 3/0. Gavin played some incredible stuff to defeat Zak 3/0 in the Semis but young Earley can use this invaluable experience to his advantage and keep improving. Artur Bialek from Poland defeated Gavin 3/1 in the Final.

Lucy McIvor was our only representative in the Ladies Semis which is all the more amazing as she has just recently switched to short pimples on her F/H! She gave Irish International Mia O’Rahilly Egan a real fright but went down 3/1 in a really tight tussle. Lucy can be very proud of her achievements and surely some big wins await in the future. Rebecca Finn defeated Mia 3/1 to win the title.

As expected the top 2 seeds Daryl Strong and Phil Wallace made it to the final virtually unscathed to meet each other once again. Phil was on his game from the start and his big F/H helped him sneak the first set 12/10. Daryl won the second 11/7 and most onlookers felt Phil needed to win the third to have any chance of upsetting the odds, Daryl pinched it 13/11 and then showed his class to win the fourth and the match 3/1.

Hamish Wright should be very proud to reach the Masters Consolation in which he lost 3/0 to Mervyn Taylor.

James Skelton was the top seed for this event but surprisingly lost a match in his group which changed the dynamics of the draw. He defeated his brother Max 3/0 to earn the right to play fellow club mate Conor Nugent in the Semis. James won 3/1 in a high quality match which really could have gone either way and now he was excited to face former International Peter Graham in the final. Peter has been training with the lads in a few of the Club sessions and James knew he was probably the underdog. The match was enthralling to watch as you had the upcoming star against the former International who was making a belated Tournament comeback. James won the first set, lost the next two, won the next and led 10-5 in the decider only for Peter to play 3 amazing F/Hs but James held his nerve to win 11/8 and the title.

Matthew McCann showed just how much he has improved recently to defeat Lucy McIvor 3/1 to win the Restricted Consolation event. 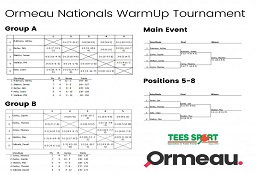 August 17, 2020
Manage Cookie Consent
To provide the best experiences, we use technologies like cookies to store and/or access device information. Consenting to these technologies will allow us to process data such as browsing behavior or unique IDs on this site. Not consenting or withdrawing consent, may adversely affect certain features and functions.
Manage options Manage services Manage vendors Read more about these purposes
View preferences
{title} {title} {title}