50 competitors came together for an unforgettable day of competition, with 5 champions ultimately crowned. We’d like to give a special shout-out to our 2022 champions Peadar Sheridan (who took home two titles!), Alex Lo, Anjali Singh and Lily Parke. Your hard work and dedication paid off in a big way!

We’d also like to thank our sponsors Jamie and Sophia from Clearpool.io for their tireless support in making today’s event possible. Without them, this great day of competition would not have been the same. If you’re looking for a Junior tournament to compete in next year, look no further than the Clearpool Ormeau Junior Open.

We would like to congratulate Peadar Sheridan on his outstanding victory in the Under 13 Boys event! His prowess was on full display, as he demonstrated a mastery of the game by going undefeated and not dropping a single set – a truly remarkable accomplishment. Toby Caldwell, who placed second, also remained undefeated until his match against Peadar. Kudos to Karsten for taking third place! Peadar’s victory is an inspiring reminder of the dedication and hard work it takes to become the best.

Huge congratulations to Glenburns Lily Parke for achieving the incredible accomplishment of going undefeated in the Under 15 girls category! Lily can certainly be proud of herself for holding her nerve to win 3-2 in her match against Ormeau’s Rebecca Scott, who put up a great fight for the title. Eimear Hutchinson from Belturbet deserves a special mention too, showing great class by playing up in an older category. This is a truly remarkable achievement and one to be proud of!

It was continued success for Peadar Sheridan who also secured the Under 15 boys’ title with a dominating 3-0 win over the impressive Russian Dublin-based, Boris Bonchev. In third place was Aaditya Singh who managed to overcome the in-form Toby Caldwell 3-1. Toby certainly put in a career-best performance, taking down Boris’ younger brother Stefan (Irish No.2) in the group stages 3-2.

It was an exhilarating category full of surprises and thrilling matches, and it is clear that these young stars are a talent to be reckoned with. Congratulations to Peadar Sheridan and all of the other participants for their outstanding performances!

Well done to Ryan Cairns from Banbridge who was determined to win in the Consolation event! He put up a great fight and eventually triumphed 3-0 over Jack Bailie from Ormeau. Ryan clearly demonstrated his dedication and passion to succeed, and his hard work paid off!

We would like to congratulate Anjali Singh for her stunning victory in the Under 19 Girls event, where she only dropped a single set on her path to the top! Niamh Mason proved to be a formidable opponent, coming in second place after a tough match against Anjali, and securing victory over Glenburns’ Lily Parke and Melissa Johnston. Finally, we would like to extend our praise to Melissa Johnston for her impressive performance and placing in third. Well done to all three ladies!

The Under 19 Boys category was full of truly amazing encounters from beginning to end. An outstanding performance from Alex Lo of Ormeau saw him take the title in the final, beating Craigavon’s Aedan McGiver 3-0.

Aedan had an incredible tournament, taking down his clubmate Tom Colvin in the Quarter Finals 3-2 before edging Osmond’s Adam Faulkner 12-10 in the deciding set of the semi-finals.

Alex Lo demonstrated his skill throughout the championship, with a 3-2 victory over No.2 seed Max Skelton in the semi-finals. Alex’s hard work and dedication to the sport over the past 10 years has truly paid off, and it is wonderful to see him win his home title amongst some of Ireland’s finest juniors.

The Under 19 boys consolation final provided a special spectacle for all Ormeau fans, as Junior Close triumphed over 12-year-old Toby Caldwell in a highly competitive match. Both competitors showcased remarkable skill and determination as they fought for the title. 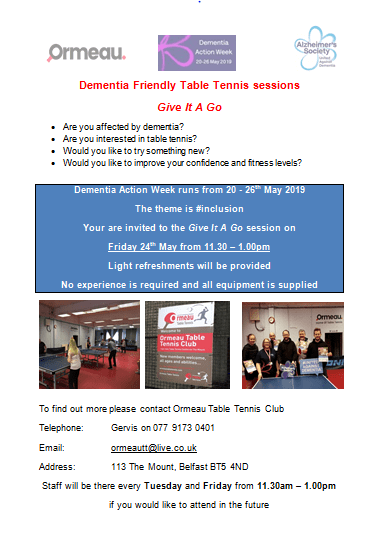 Dementia Give It A Go Day

May 20, 2019
Manage Cookie Consent
To provide the best experiences, we use technologies like cookies to store and/or access device information. Consenting to these technologies will allow us to process data such as browsing behavior or unique IDs on this site. Not consenting or withdrawing consent, may adversely affect certain features and functions.
Manage options Manage services Manage vendors Read more about these purposes
View preferences
{title} {title} {title}